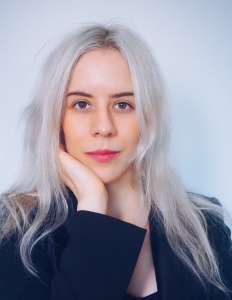 Having grown up as the daughter of a music professor and a teacher, Ámaris went to drama school, where she started to listen to electronic music for her dance studies. She then started the dance floor project “Geiko– female electronic dance music”, the first album of which was released in 2014, which was well received by critics. She also appeared in several plays. Ámaris’ strong vocals have been described by the press and by listeners as “hypnotic” on records like the mingled blues and electronic record “Aquamarine”.

Ámaris’ skills in combining genres like ambient, electronic, as well as RnB and blues have been praised by critics several times. Her most recent album “26” was released in May 2019.

The “multi-talented”- labelled artist has recently started to get back into acting with “Supernova”.

In recent years, she has branched into futurism and science fiction with her novel “Aquatropolis- The Two Queens”.

Ámaris is an ambassador for the non-profit organization Big Blue Ocean Clean-up, which fights to reduce plastic waste in the oceans.