I am getting asked sometimes how I write my stories, or what kinds of books I like, or if I’d like to read something other people have written. So I thought I’d start giving some advice for writing in fantasy and science fiction. I’ve been a writer since I was 11 years old. If you start at that age, you are prone to be making a lot of mistakes when writing.

I don’t have a very long attention span when it comes to books, and only a few books manage to hook me. It may be just how I am, I may have Attention Deficit Hyperactivity Disorder (it is very likely I have that), or I just may be too picky, put it the way you want. But I don’t like books that are boring. If you send me your book, I might put it aside after reading the first page, so be warned👁

First, I’d like to discuss one of my favourite “blunders” I sometimes read in books, one that very likely causes me to put the book aside or thumb to the next chapter at once. It is sword fights. You know which ones I am talking about. They’re ubiquitous. You will stumble upon them sooner or later if you read any fantasy novel.

If you have managed to read the whole swordplay you have earned my respect. I already stopped reading while writing it, it’s so boring.

Sword fights like this can make you put the best fantasy novel down. If I see that a few pages of swordplay are about to happen in a book, I skip it and start reading again a few pages later. Because I don’t even want to read the somewhat bearable ones. They are boring, and I hate them.

But why are tense, dramatic sword fights so boring in books? In a movie, sword fights are one of the coolest things. Swords are cool things! Why can’t we describe them in a way that they don’t become torture for our readers? I made the same mistake when I wrote my first sword fights.

The problem is actually in our language, and in the way writing works. Language is arranging words one after the other, from left to right. When we describe things, we tell one after the other. That’s how language and writing work. When we see swordplay in a movie, a lot of things happen simultaneously. That’s not possible to describe in language. “He attacked and then dodged the attack” is still a chain. And that’s what takes the tension and action away from sword fights when writing them.

I’ve tried to put that into a little coordinate system: 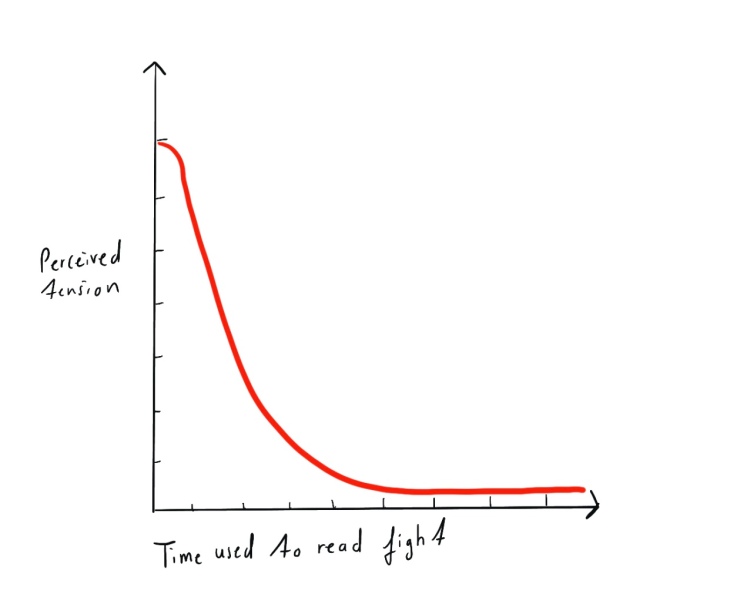 The problem that we need several minutes to read a sword fight that lasts only a few seconds, is what takes the perceived tension out of the writing. So how could we describe the sword fight?

Feelings and noise instead of stratagems

I know, I know. Feelings? How’s that supposed to be more interesting than the fight? But if you describe a sword fight from point of view of a third person, try to describe what the person feels while watching the fight, instead of telling us everything you know about fencing theory. You could describe the noise, the clangour of the two blades clashing together in the crisp cold air in the snow-spangled wood where the fight takes place. You could describe that the third person doesn’t pity the guy that’s bleeding from a hideous gash, because maybe they are a foe. Maybe the third person is revolted, amused, aghast at how shoddy his pupil parries. There must be something he observes.

Short scenes that make the reader imagine the fight

You don’t have to describe every hit, stab, jolt. You could describe what the third person sees in short sentences that make the reader imagine what happens.

A minute later, there was a pandemonium of swords and spears clashing, men roaring, and blood spilling cloaks

A minute later, the warriors charged and and the first rows clashed together violently. The knights swung their swords and attacked and were met by a row of men with spears, who responded to their attack by piercing their cloaks.

That doesn’t mean you can’t describe a fight like that, I also understand that sometimes you just have to try and hit those 100 000 words. But don’t describe too much; your reader should be capable of imagining what goes on if you describe swords and spears, the metallic clangour in the cold air, and the blood spilling the white snow (or some of that ilk).

They were in a whirl of cloaks and spears.

He attacked with his spear. The other guy’s cloak whirled as he dodged and parried with his own spear.

So that’s enough talking about books for today. Hope it helps you with writing your fantasy novel and let me know what you think in the comments.